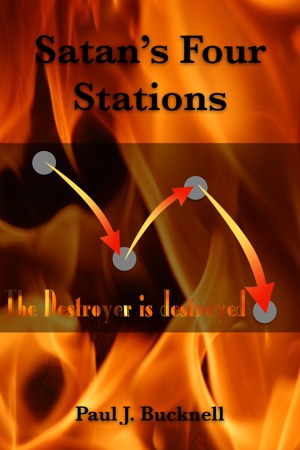 The Destroyer is Destroyed as seen in Revelation!

A clear picture of Satan's activities and downfall helps build the strong faith needed to stand against his pernicious attacks.

Learn how Satan's four stations affect you. A thorough study of the evil in history and in the Book of Revelation!

Satan’s Four Stations introduces the four stages describing Satan's brief time as revealed in the Book of Revelation. You will see where he is now and what he is up to next. Be prepared!

1. From Heaven: Satan’s Origin
2. In the Earth/Abyss: Satan’s Limitations
3. Released from Abyss: Satan’s Release
4. In the Lake of Fire: Satan’s Demise
Appendix 1: Video

An understanding of Satan's four places stated in Revelation helps sort out a lot of puzzles on interpreting the Book of Revelation and the oncoming events during the last times.